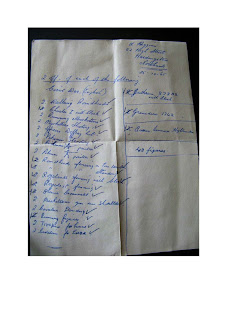 In an earlier post I mentioned the earlier Les Higgins ECW figures which were available on subscription. From Richard via John C of 20mm Nostalgic Reveival I have received this image of a letter from Les Higgins which accompanied the fulfiilment of an order for these figures. It may not be a complete list (the order may not have included examples of all the figures available) but it is the first time I have seen anything approaching a list for these figures, so I thought it would be useful to post it here and also on The Old Metal Detector.

In case the photo is hard to decipher (it is not a scan) here is the list:


Guthrum was a Dane who first defeated and then surrendered to King Alferd at the Battle of Chippenham in 878 AD. This figure is almost certainly the one posted last week by Harry P here on his Parum Pugna blog.
Posted by Vintage Wargaming at 10:55