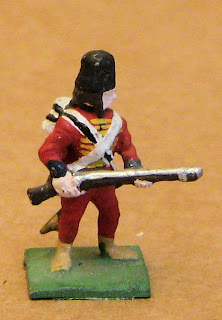 
If the past really is a different country and they did things differently there, the basic nature of wargamers and the Dennis Wise-like ability of a high proportion to start an argument in an empty room seems to date back to early days.

Such an exchange underpins the two articles posted here from Miniature Warfare magazine (April and December 1970). While expressed in slightly more stately terms than many a current day Internet based discussion, there is an elegant hint of scorn on display in the first and last paragraphs of Stuart Reid's article.

I found Stuart Reid's notes on available figures interesting, in particular the reference to Lamming Seven Years war figures. I have never seen these, or any pictures of them; in a later article in 1972 he mentions that Lamming have ceased to make them. i do have a reasonable number of the S Range Jacobite Rebellion figures, which are among my favourite ranges.

This post is intended to be the first in a short series of Jacobite Rebellion (45) posts. This will include Start Reid's later Miniature Warfare articles on refighting the Jacobite Rising of 1745-1746. I have parts 1 and 3 of this series but am missing part 2, which was published in April 1972. If anyone has this article and can provide me with a scan to share here, I would be very grateful. (I have permission from John Tunstill, the publisher of Miniature Warfare, to reproduce material here). 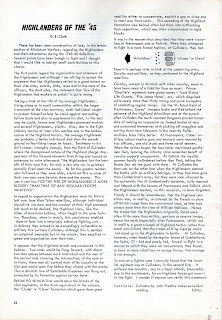 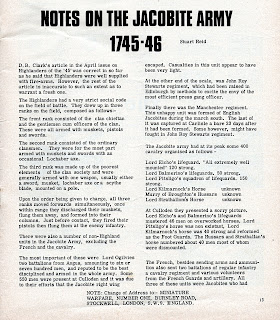 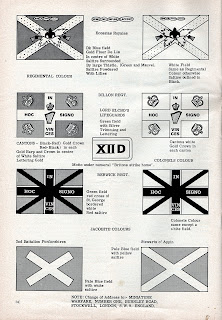 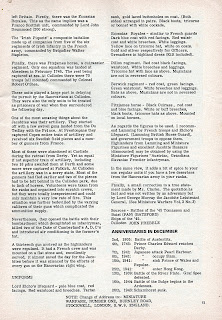 This article from Miniature Warfare magazine February 1970 just about scrapes in to the Airfix ACW theme as these German WW1 guns and equipment are converted from the Airfix ACW set.

At a time when pretty much anything you want is available from a range of manufacturers and in a range of scales, and where you can often view and buy them on line, this article reminds us of a different time, when modelling, converting, bodging and other ways of making do were necessary even for some mainstream items.

This will be the last ACW Airfix related post for a while. I do intend to add further articles to the series on Juhn Tunstill's Miniature Warfare ACW Campaign in Ireland (see earler posts here) 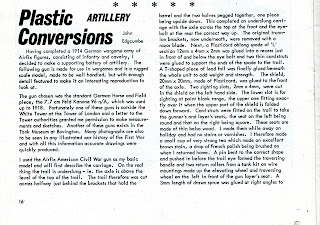 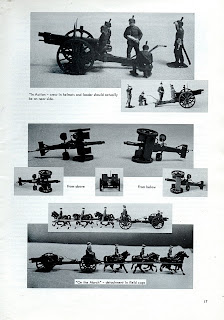 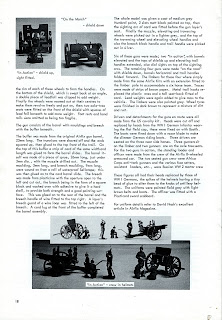 Posted by Vintage Wargaming at 15:29 2 comments:

An Airfix ACW army for beginners

From Miniature Warfare magazine 1972, this article by A. Mason goes into how many boxes of Airfix ACW troops you need to buy (at 17p per box)to get a matched pair of starter ACW armies, although distressingly he allows the idea of buying some metal command figures.

The pictures are unrelated to the article but support the general theme. 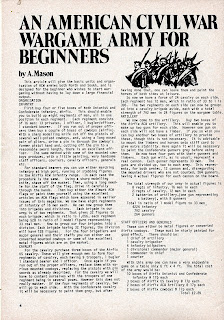 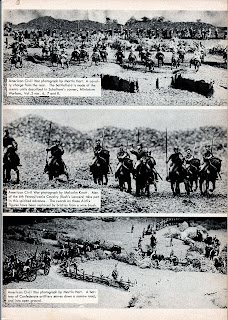 Posted by Vintage Wargaming at 14:39 6 comments: 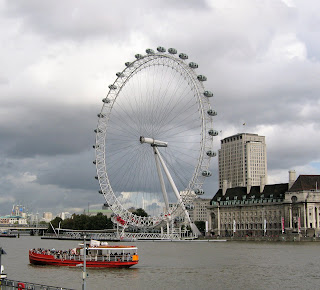 Just a brief post to note Vintage Wargaming went past 150,000 page views some time in the early hours of this morning. The current follower count is 189.

Thanks to everyone who views or follows the blog.
Posted by Vintage Wargaming at 16:36 9 comments:

American Civil War with Airfix - Part 2 The Battle of Rogersville

Airfix ACW wargaming reached as far as Denmark. This May 1973 article from Miniature Warfare magazine reports on a battle fought in Copenhagen over Christmas 1970. The story of putting the game on is interesting and the battle report, while brief, is well illustrated with photographs of figures and terrain. 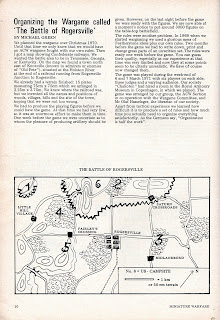 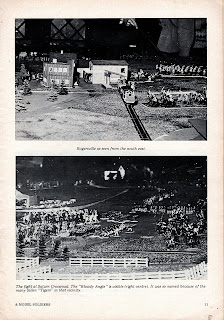 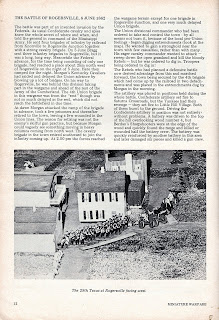 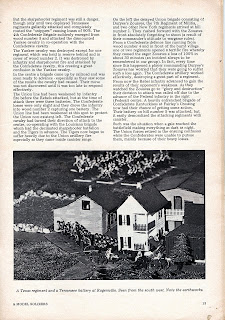 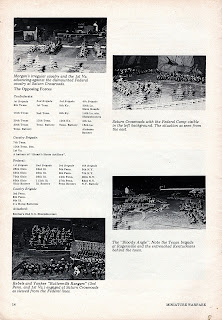 Posted by Vintage Wargaming at 14:21 No comments: 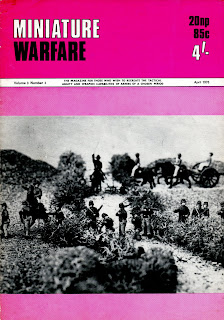 As the start of a short series on American Civil wargaming with Airfix, here is an article by Malcolm Knott entitled An Airfix Army, from the Subaltern's Corner feature In Miniature Warfare Magazine from February 1969.

As the article itself states, the importance of the Airfix ACW range (Union Infantry, Confederate Infantry, Artillery, US 7th Cavalry, plus Cowboys and Wagon Train) was to provide the basis for a complete wargame army of all arms plus logistics at a reasonable cost.

I'm sure lots of people must have started off with these figures, inspired by articles like these, the ACW ones in Terry Wise's series in Airfix Magazine on Buildings for Wargames and his Airfix Guide no 24 American Civil Wargaming (though this last was published five years after this article).

The figures though basic still are reasonably available and can be turned out very well - have a look at Matt's Command Group converted from two of the Cowboy figures here. Matt has a project to build Airfix ACW armies which will be interesting to follow.

I'm intending to mine the Airfix ACW seam from Miniature Warfare further with a few more posts, including a battle report and some more photographs. 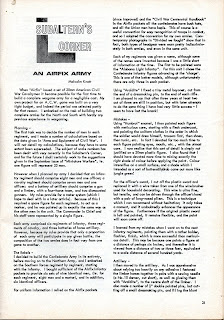 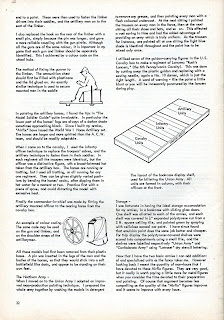 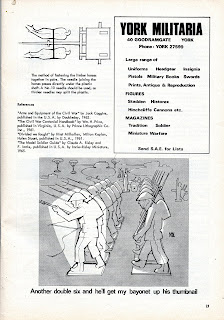 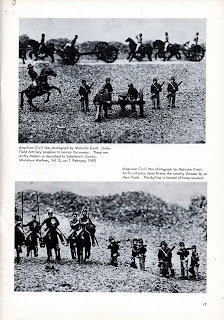 Posted by Vintage Wargaming at 14:53 3 comments:

The Wargame at West Point 1972 by Raymond E Bell

Another from the archives of Miniature Warfare magazine, from June 1972. 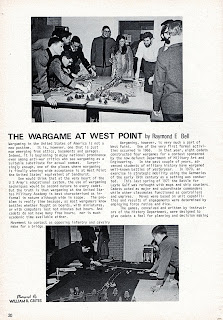 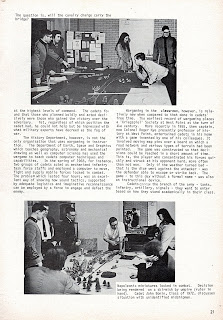 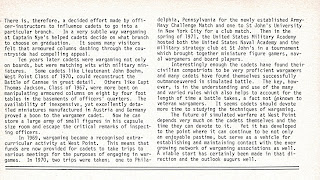 Posted by Vintage Wargaming at 12:10 No comments: 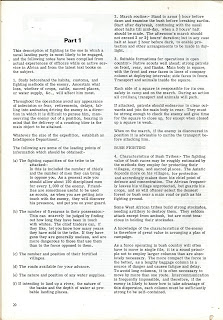 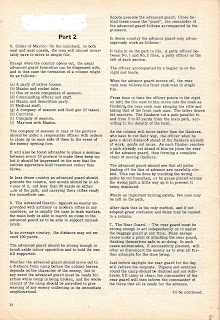 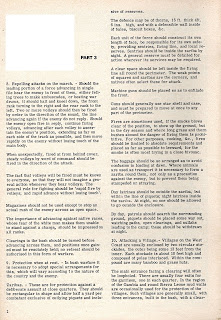 Published in Miniature Warfare Magazine in three parts in 1971 under a rather un-pc title, which I have removed, these three articles wre abstracted from the HMSO publication of the title, published in 1910.
Posted by Vintage Wargaming at 12:07 1 comment: