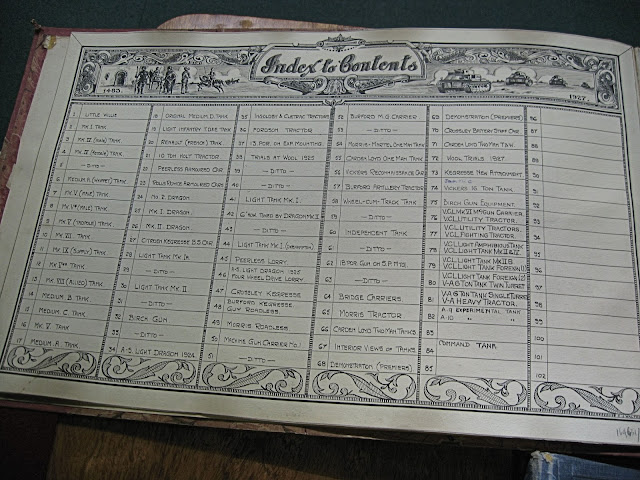 After a very pleasant morning at Beamish Museum's Regional Resource Centre I am better informed and have seen some marvellous photographs.. The albums have been in the Museum's collection since the late 1960s. There are two albums: one has an index (pictured above, poor photograph taken today) and the other does not. The contents start with Little Willie (1915) and go up to about 1947, though the WW11 stuff is mostly of Valentines of various sorts.

I don't recall seeing any of the photographs in the albums before - they tend to be factory shots. Highlights include four Birch guns together, a number of pictures of a Vickers Medium bridging tank, and a couple of pictures of the Burford Kegresse MG carrier, one from the front and one from the year.

The museum is going to send me all the images on CD and has given me permission to post them. I will have to work out the best way to do this but there should be some very interesting material starting to come out soon.

And I felt  I was able to give something back as I was able to tell them the difference between a male and a female tank.
Posted by Vintage Wargaming at 12:17 4 comments: 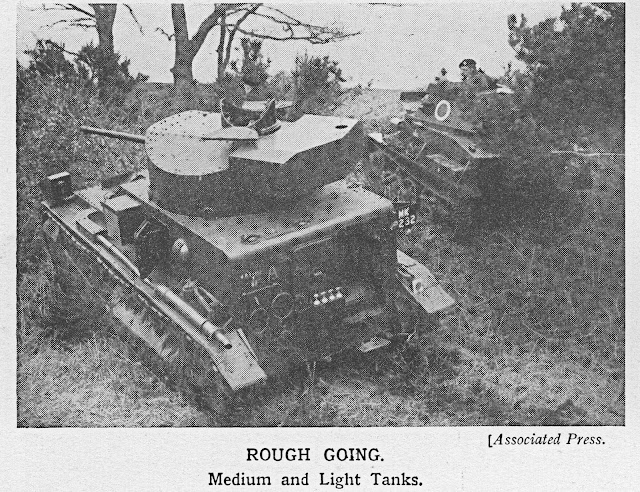 This picture is another from the Wonder Book of Soldiers but the good news is I have heard back very promptly from Beamish Museum.

The photographs listed and mentioned in my last post are from two large albums which came from Vickers. As I undesrtand it there may be more photographs than currently listed on the web site but they have been digitised already. I am going to arrange a time to view the albums and will be able to request copies of images. I will see if I can get pernission to post some of the most interesting ones here.

It will be good to see if the photographs from the company records are previously unknown or possibly well reproduced elsewhere.
Posted by Vintage Wargaming at 13:31 5 comments: 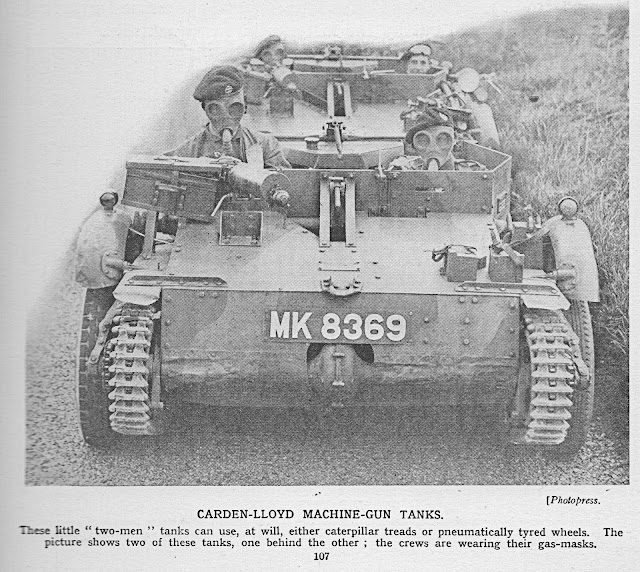 Another pic from the Wonder Book of Soldiers. The wheels on the Carden Loyds identify them as Mark Vs, as used for recce by the Experimental Mechanised Force

I have been intrigued to find 153 records listed in the Beamish Musem's People's Collection catalogue under the heading development of tanks buily by Vickers Armstrong Ltd. The photographs have not yet been digitised but the captions are very interesting and relate mainly to interwar types, It may be these are all very well known photographs or it could be they haven't really been seen before. They could conceivably be from the Company's (Vickers Armstrong's) own records or possibly from some king of directory or catalogue, but it looks to be a single source.. Everything is there - Vickers Carden Lloyd, Mediums 1-3, the Independent, Citroen Kegresse and much more.

The captions are obviously well informed so without seeing antything I wonder if they might be from Vickers Armstrong's contemporary sales material.

I am enquiring aboout the origins of the photographs and if it would be possible to visit and see them.The hope of course would be to move them up the prioirity list for digitising, so they can be generally avaialable.
Posted by Vintage Wargaming at 20:39 7 comments: 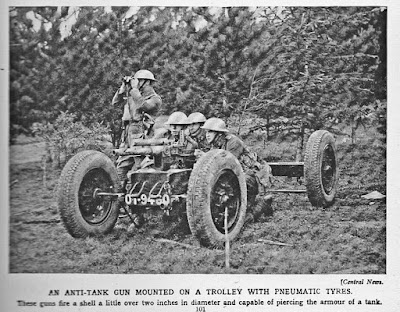 Can anyone help with an  identification of this anti tank gun?
Posted by Vintage Wargaming at 23:20 12 comments:

Three newly completed S Range units - the top one is a recent acquisition in two lots from ebay, ACW and originally painted as two Confederate militia battalions, now restored as one large (or two smaller) battalions of US marines. The officers, which came with them, are S Range French Crimean ones and fit rather well I think.

The next two units are S Range Franco Prussian War - Saxon and Prussian line infantry. These have been part finished for around six months as other things jumped the queue ahead of them so it is a relief to get them finished. This means all my FPW guys are done, apart from eight or so generals and staff figures.

The intention is that these will join the forces (S Range FPW, Crimean and some ACW) available to refight the Georland battles. The Marines and also some ACW zouaves will be available  if required.

Were I starting from scratch and could afford to do so, I would go with Peter Johnstone's Spencer Smith Classic 30mm FPW range. These are new figures, not metal versions of any of the old plastic figures. George Keef originally used a collection of c40-45mm demi rondes figures and the Spencer Smith Classics would give an appropriate look in a more manageable format. Maybe one day.

My intention is to use an adaption of Command and Colors Napoleonics both for Crimean War and for Georland. I have now acquired both an additional set of the old TSS 12" terrain hexes and a 6" hex mat from Corsec Engineering so am hoping to make a start sometime soon - just need to work out how I can get my two expanding tables set up in the house with room to move round them.
Posted by Vintage Wargaming at 06:53 2 comments:

I have long been interested in British tank development and doctrine between the wars, in particular in the Experimental Mechanised Force/Experimental Armoured Force of the late 1920s, and have been assembling some vehicles to portray it in 1/76 and 1/72. While looking for information on the armoured cars with the force this morning I came across this - Pathe News Super Gazette newsreel of Winston Churchill visiting manoeuvers at Tidworth, listed on the IWM site as 1926 and on the Pathe site as 1927 (which makes more sense).

The clip may be well known, but I have never come across it before.

If anyone can suggest a reasonable proxy for the Burford Kegresse half track in 1/72 or 1/76 I'd be very grateful to hear from you. - the nearest I have come so far is the EWM Citroen P19 for Dragons Portees.
Posted by Vintage Wargaming at 10:17 7 comments: