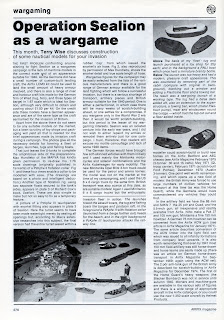 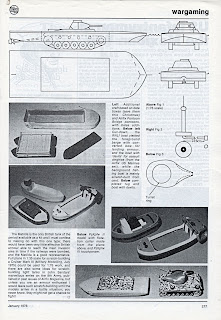 Posted by Vintage Wargaming at 18:42 2 comments: 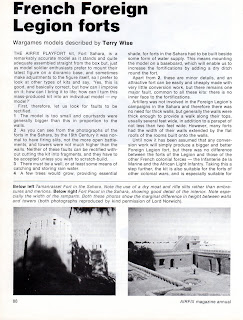 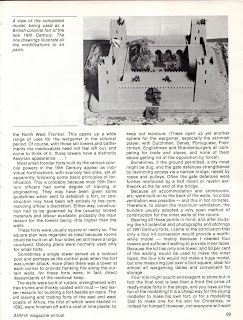 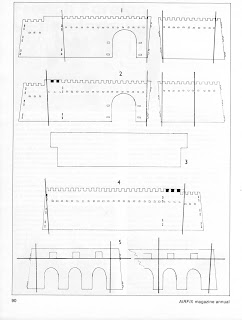 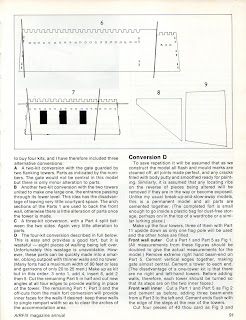 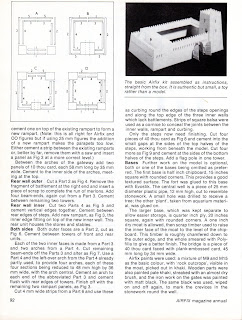 Posted by Vintage Wargaming at 00:57 No comments:

The passing of Terry Wise has just been announced on TMP here.

I never met him, but was inspired by his books, rules, modelling articles in Airfix Magazine, and observation Post in Military Modelling (incorporating Battle). I also bought some books and figures from him through the catalogue he published from time to time. In my limited dealings with him he was always courteous - a real gentleman - and I am sure he will be missed by many.

I shall be looking out for some appropriate material to post in tribute in the near future.
Posted by Vintage Wargaming at 20:14 5 comments:

For those who appreciate the chance to war game less familiar conflicts, this article by Christopher Lance Scott from Wargamer's Newsletter #190 from January 1978 covers the War of the Vendee. Of more general interest is the insight provided by Don Featherstone's Editor's Note. 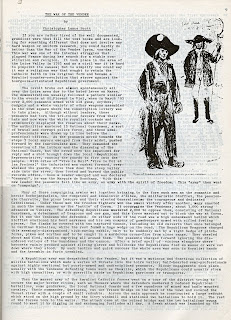 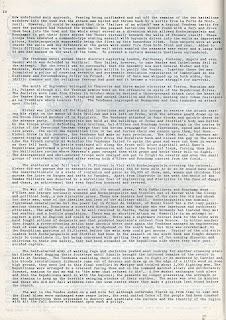 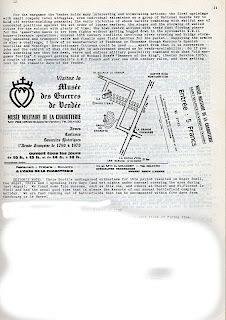 Posted by Vintage Wargaming at 10:36 No comments: 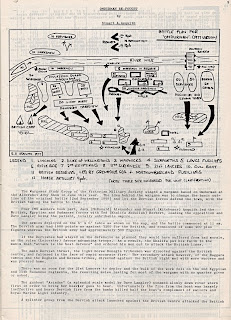 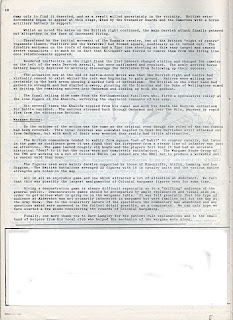 Posted by Vintage Wargaming at 09:21 No comments: 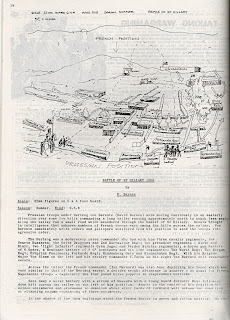 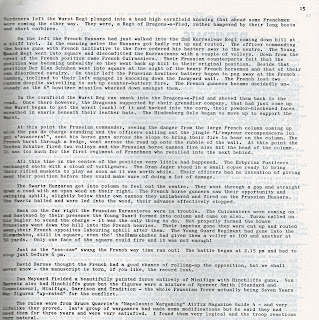 Posted by Vintage Wargaming at 13:07 No comments:

The Battle on the River Elbow: Seven Years War, by David Barnes

This Seven Years War battle report by David Barnes appeared in Wargamer's Newsletter No 202 in January 1979. It is a good example of his illustations, including maps, portraits, and vignettes from the action. 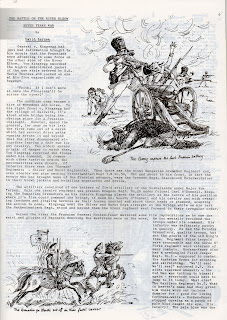 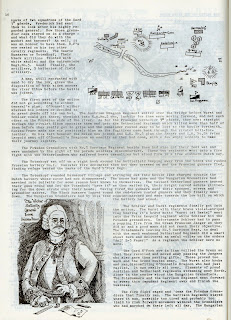 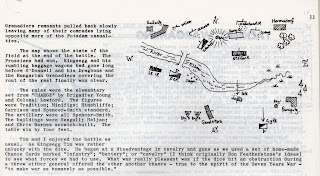 After a few weeks of watching the number of followers of Vintage Wargaming stuck on 99 the nervous nineties are over - having been away from the internet and e-mail for a few days I came back to see a couple of new joiners had taken the numbers obver 100. A small landmark but it made me smile - clearly a watched blog never boils.
Posted by Vintage Wargaming at 10:01 No comments:

I always think of Charlie Wesencraft (see other posts here) as one of the unsung heroes of early wargaming. It's good to see his books Practical Wargaming and With Pike and Shot made more easily accessible through their inclusion on John Curry's list of republished classics.

The weather gauge was included in Practical Wargaming, published in 1974, so this is an earlier public appearance. I recall mine was made from a Pocket Mastermind board (remember them?) 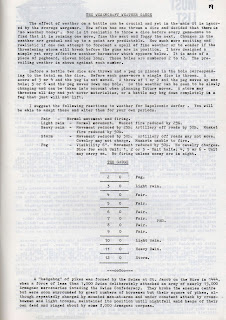 Posted by Vintage Wargaming at 09:52 No comments:

In the Editorial to Wargamers Newsletter #208 of July 1979 Don Featherstone wrote this announcement and tribute to Charles Grant. 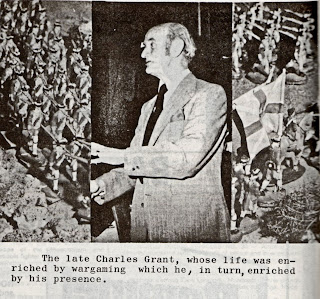 It is with the greatest regret and sorrow that I report the death of an old friend and veteran wargamer Charles Grant. Apparently it occurred recently and was very sudden but I have no details. Charles was perhaps the most experienced wargamer around, being in the hobby long before I ever became aware of wargaming and his contributions to it, both practical and literary, played a major part in the great advance to its present status. At various stages in my early acquaintance with wargaming, I had stimulating meetings and wargames with Charles, although in recent years we have not seen much of each other. This knowledgeable and experienced senior statesman of our hobby will be sadly missed and there are many of us who will remember him fondly for years to come. 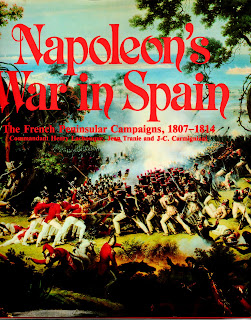 One of the pleasures of looking through old copies of Wargamer's Newsletter is browsing the book reviews, either for reviews of classic books, or mentions of books which have previously escaped you notice. With the advent of the interweb and sites like Abebooks (or even e-bay) it is much easier to track down and obtain some of these more obscure titles.

Falling firmly in the classic category is this review of Lachouuque's (or more properly perhaps Tranie and Carmigniani's) Napoleon's War in Spain.

My own copy is of the Arms and Armour Press English language edition of 1982. The format of the book is a little too wide for my scanner but hopefully the picture gives a good impression of the cover. 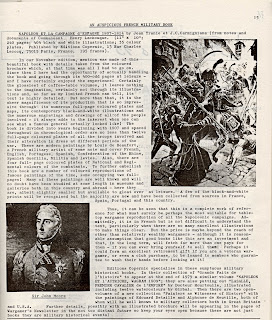 When idly flicking through the labels on the right hand side of this blog, I was a little shocked to see how few posts there were related to Charles Grant. As a step towards remedying this, here is a short piece he wrote for the Wargamer's Annual 1965, Don Featherstone's follow-up to his Wargamer's Yearbook 1964. As this won't be widely available elsewhere I thought it would be good to post it here.

Incidentally, it has reminded me of my long standing quandary over DF's use of the Wargamer's apostrophe (as in the Wargamer's Newsletter or Wargamer's Annual). Had it been Wargamers' this would suggest it was intended for or belonged to more than one wargamer; as it is it suggests a single wargamer. Is this the Don himself, sharing his thoughts with others where he is the eponymous wargamer? If so surely this is the spiritual ancestor of every wargames blog. Or is it intended to be the newsletter of every wargamer - "the wargamer"? I just don't know, and short of asking him (and I really don't want to bother him with this) I don't think I ever really will - but interesting to speculate... 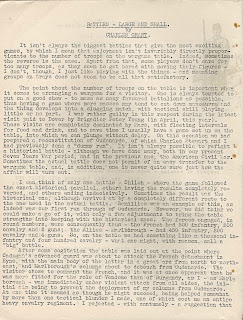 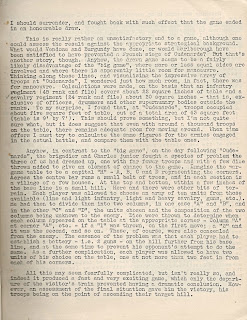 Posted by Vintage Wargaming at 15:47 3 comments: 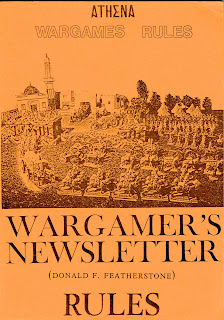 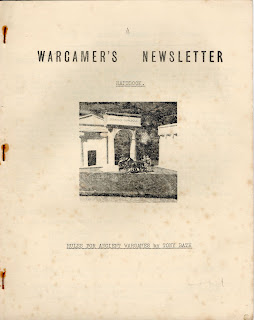 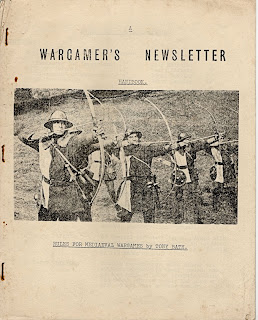 Following the comment on the previous post, I dug out my copy of Athena's 1987's publication of the Wargamer's Newsletter Rules.

In my response to the comment, I relied on the contents given on Vintage 20mil, but once I dug out my copy I realised this was not comprehensive.

The rule sets included are:

The Athena publication is a 124 page A4 perfect bound booklet with an orange colour.

The second two images are of the original issues of the Tony Bath ancient and Medieval Rules, as Wargamer's Newsletter Handbooks. These were available to order from Donald Featherstone. 8 of them (excluding the Don's medieval and English Civil War rules) are listed in a notice in Wargamer's Newsletter from December 1967 at 3s 6d each or the set of 8 for a guinea, including postage. Also listed is Wargames Terrain for 10s 6d, an illustrated booklet describing how to construct realistic battlefields. I'm not sure when the original sets were first made available, or the order they came out in.
Posted by Vintage Wargaming at 15:14 5 comments: