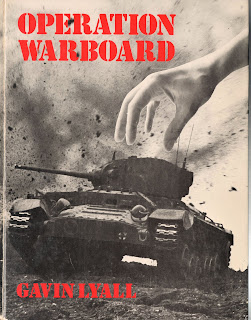 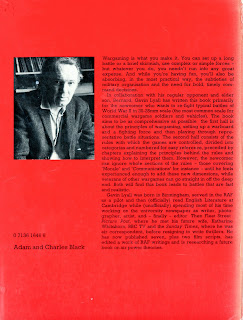 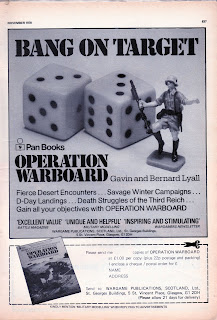 One of the early books which seems to get unjustly neglected is Gavin Lyall's Operation Warboard (though it does have a number of strong adherents). Lyall was better known as a thriller writer, and was married to the journalist Katherine Whitehorn.

I wonder if anyone out there remembers making the machine gun grid for this game...

I am fortunate that my copy of the book is the original hardback (though I have a sneaking suspicion I may have a paperback copy somewhere too).

The pictures show the front and back covers of the hardback (published Adam and Charles Black 1976) and an ad for the Pan paberback from Military Modelling incorporating Battle for wargamers from November 1978.
Posted by Vintage Wargaming at 22:18 21 comments:

I've been keeping an eye on the blog counter this evening and it has just gone past 100,000 hits. Thanks to everyone who visits, or comments.
Posted by Vintage Wargaming at 23:08 6 comments:

The old and the new: Command&Colors: Napoleonics with vintage figures

I'm not really sure which blog to put this on, so I'm posting it here and on the Hinton Hunter.

This weekend saw a visit almost to the Kingdom of Fife, to join Tony of Prometheus in Aspic in test playing Richard Borg's new Command&Colors Napoleonics with vintage figures - Tony's Peninsular French against my Hinton Hunt and Der Kriegspieler Russians and Prussians.

An emergency visit to my local timber merchants on Thursday morning equipped me with around 40 120mm square sabots made from 4mm MDF (£6 the lot); with these and three trays of figure we were good to go.

Others have been playing C&C: Napoleonics with figures (see Conrad Kinch's recent excursion on Joy and Forgetfulness) but the combination of Tony's hex based set up, and the vintage figures we used, made for an interesting spectacle. We played three games - the Rolica first French position and second French position scenarios to a conclusion, all within one day including lunch out and an Indian takeaway. The Russians and Prussians stood in for the British in these scenarios, using French (rather than British) unit characteristics.

The game worked well, was easy to pick up, thoroughly enjoyable and somehow seemed appropriate to the figures. Along with Tony, I wouldn't want it to be the only Napoleonic rules I ever played, but it was thoroughly enjoyable and refreshing to get three games played right through in such a short time. Plenty of surprises to keep you on the toes, and of course Tony had done all the hard work of customising the dice and cards from the game.

Here are two slideshows, one for each of the scenarios (we played the second one twice.

Posted by Vintage Wargaming at 18:43 5 comments: