I am indebted to John H for his flagging up this YouTube video to me.

It is from a Russian TV programme dubbed into English. At about 7 minutes 25 seconds it goes into an item about the toy soldier collection and war game of Boris Popov and his son Rudik. This revolved around a fictitious country called Elyria (I am not sure of the spelling). Boris Popov was an artist and started a Chronicle of the country in 1912, recording the major battles fought out with his brother and sister. It was illustrated by its author and the Chronicle itself and some sample pages can be seen in the YouTube item.

John was struck by the similarities with the Keefs and Georland. True, it dates from some 50 years later, and the figures in the collection were flats, not demirondes. As artists the Popovs also made a large number of buildings. Many of these were lost as the family was forced to move around in Russia, but Rudik Popov has recreated many of these.

Another difference with Georland is that the rules of the family wargame survive, and a game is show in progress. Moves are measured with dividers, missile fire is by nails fired from cannon, and hand to hand combat resolved by six sided dice.

Thanks very much to John for this find. It has many parallels with Georland as well as interesting differences. It makes you wonder how many more similar collections and set ups are out there waiting to be discovered.
Posted by Vintage Wargaming at 00:09 8 comments:

A couple of S Range units

I have finally gotr round to photographing these for my Lone S Ranger blog.

Then a unit of AWI Highlanders, reinforced by two piopers and a mounted officer adapted from the jacobite Rebellion range.

I know the painting isn't up to much, but they remind me how much I like the old S Range figures more and more the more I look at them.
Posted by Vintage Wargaming at 19:19 5 comments:

With typical efficiency I have missed that 8th April was the 5th anniversary of this blog (but not of vintage wargaming itself, which has been around for much longer).


As this is the Wooden Anniversary, I thought maybe this would be appropriate: 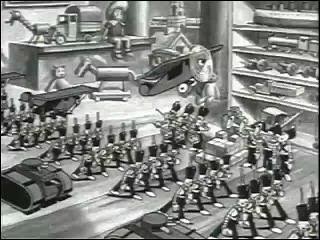 Real life and the normal slow down in posting have reduced the frequency of posts, but I hope to continue to add new (old) material as it comes to light. In the mean time I hope there is enough already here to make the blog a useful place to visit.

Posted by Vintage Wargaming at 22:04 6 comments: