More News from the Antiques Roadshow

A further email has landed from Graham Lay - he thinks the figures may have been 30mm but can't be sure. He has also been reading your comments here.


Thank you so much for your further e-mail. I had no idea that Donald Featherstone had died recently, what a loss. However he has left behind a huge legacy of which we can all be grateful.

I am truly sorry that I cannot recall the size of the figures as I know how important this is to the identity of the makers. I have viewed again all of the recording we made including that which was left out. As you will no doubt understand, we often take up to 30 minutes to record all that is needed, which is edited down to about 4 minutes. Much of the remainder is no more than repositioning things and video that we can use in editing later (what we term 'cutaways'). These consist of close-ups of a finger pointing, or a minute of me nodding and suchlike. However the day is incredibly hectic and it is difficult to remember all things. Even so I am pretty sure that I recall 30mm, although I may be mistaken. I hope you will be able to discuss this with the family perhaps.

Having read some of the other comments one of the things that I recall was that 'miniskirt' highlanders were felt to be repainted French figures and not moulded as Scots at all. I think it is important for you to discuss this with the family really. Will you let me know if you do so and what progress you make please? I would be truly interested to know your thoughts once you have gone deeper into it.

If any further progress is made, I will let you know, but timing may be dictated by the wishes of the family, should they make contact.
Posted by Vintage Wargaming at 17:28 3 comments: 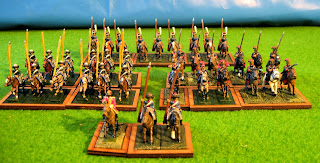 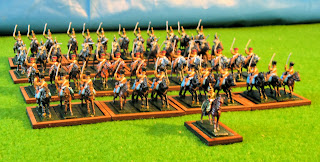 I have been working on completing (hah!) my S Range Crimean war armies. I don't offer these as example of painting (mine is very basic and based on as neat block painting as I can achieve) or particularly wonderful figures (though I think they are charming). I do think they look good en masse and I'm quite pleased with the overall effect.The Crimean Range was among the later figures produced under the S Range banner and also is of interest for coming out at the time Minifigs were moving from one piece cavalry to separate riders and horses; certainly some of the Crimean Types came out in both formats, so marking this transition.

I still need to add flags - I have some rather nice Adolfo Ramos ones but they are ever so slightly too large for the S Range standard bearers, so I need to extend some flag poles; also they do not cover all the units I need to cover. My Turks are waiting for a couple of suitable artillery pieces (the British have four Hinchliffe guns I had to had; there are plenty of Russian artillerymen but so far they only have French Napoleonic cannon. The French contingent is future project. Franco Prussian War and Jacobite Rebellion will be my next S Range projects.I do have other Crimean figures, mainly from Douglas and Hinton Hunt, but I would be reluctant to use them together.

When I started out I decided to mount figures individually on MDF bases, 20 mm x 20 mm for foot and 20mm x 40 mm for mounted figures. I have now added a stock of suitably sized close order trays from War Bases to accommodate my units. I am rather pleased with the results.

I'm intending to post these and maybe a few more pictures with fuller captions over on the Lone S Ranger blog.
Posted by Vintage Wargaming at 20:43 3 comments:

Wargaming on the Antiques Roadshow - take 2

The Antiques Roadshow got back in touch with me yesterday after I contacted them on date of broadcast of the item shown in the previous post.

Thank you for the email which has been forwarded by our office at the BBC regarding the fascinating early lead wargaming figures and most unusual and possibly unique hand written book describing some of the campaigns fought between the youngest brother in India and other countries and the two brothers at home in Liverpool. One of the interesting aspects is that most of the figures had been repainted in different uniforms, so making French soldiers (from German and French soldiers of the Franco-Prussian war) into British for example. This was done actually at the time of that war or probably just afterwards. I am not sure if this is something that happened often but I believe not. It is likely that necessity caused them to use whatever they were able to obtain.

I felt sure at the time I saw the collection and recorded it with the owner (grandson of the original chap) that this was not just a collection of some importance in the wargaming field because of its early period but also would be of great interest to those whose pastime it is.

I am not certain that the owner I interviewed knew of the real historical importance of the objects or if they had ever come across people such as yourself, or Donald Featherstone for example, in the past. The original owner, whose photographs we showed in the programme was born in 1858. The handwritten book gives dates that are not quite correct bearing in mind his birth year and it appears earlier than in fact it was. For example it states that the army was formed in 1860, which would lead the reader to believe that he started to use the figures at that time, whereas in fact he would have only been two years old. It is understood that he started wargaming at around fifteen years of age. This must be borne in mind if you have the opportunity of looking at it. It primarily describes campaigns in the fictional country of Georland (his name was George) and is quite detailed and has some good illustrations. George died fairly young of dysentery on the ship on his way home from Rangoon I believe when the current owner's father was four years old. In some of his letters he describes various campaigns and it is not until they are read some way into the letter that it is understood whether he is referring to real or lead soldiers!

My office at the BBC is in contact with the family and will contact you shortly to let you know if they are happy to talk to you. I will give my full support and encouragement to the family to speak with you.

I have asked Graham if he could estimate the size of the figures - whether 30mm or 40-45mm - as preople have found this surprisingly difficult to do from viewing the programme.

I will let people know of any further progress through the blog
Posted by Vintage Wargaming at 18:15 9 comments:

Wargaming on the Antiques Roadshow


Tonight's edition of the BBC's Antiques Roadshow (Eastbourne Bandstand 2) had an intriguing item on a collection of around 1,000 metal figures dating from the 1860s and 1870s, which had been used for wargames by a boy who became and officer in the Royal Scots Fusiliers in 1878. He took the bulk of them on his first posting to Rangoon, where he played wargames on the floor of his bungalow with the Regimental Surgeon on a large canvas map spread on the floor. It also sounded as if he might have conducted some play by mail activity with his brothers who remained with the rest of the collection in Liverpool. The collection also includes a large notebook which described how these wargames were carried out.

Antiques Roadshow expert Graham Lay says he is puzzled as he thinks wargaming (meaning battles with model soldiers) is usually accepted to have started at the turn of the century. This view is understandable - Lloyd Osbourne's article in Scribner's Magazine on Robert Louis Stevenson's wargames appeared in 1898.

While clearly people will have fought battles with their model soldiers for many years, from simple plying to more formal rules, this does seem a notable new instance and could be the earliest dated example of more formal wargaming.

I recently acquired three unopened packs of AR1, Roman Imperial Legionaries, along with the original painting guide and shield transfers. The painting guide is headed sheet 2 so presumably sheet 1 dealt with the Greeks.

As I hadn't seen the instructions or the transfers before I thought I would post them here. 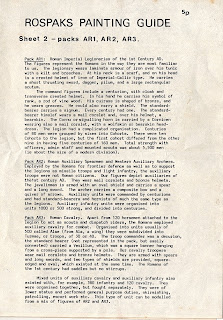 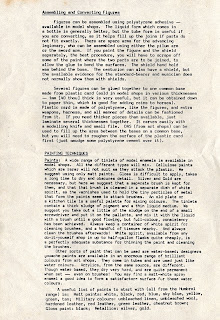 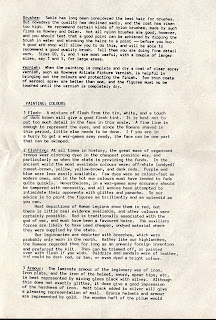 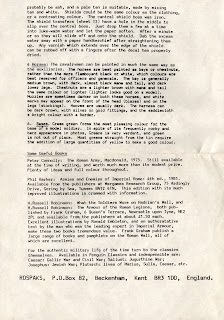 Amid all the reports today of the death of Don Featherstone I was wondering what would make a fitting tribute here.

Wargamers Newsletter was on of his greatest achievements, not just for the length of time over which he published it monthly (1962-1980) but the way in the pre internet age it informed and sustained wargamers across the world.

It therefore seems appropriate to let Don's own words speak for him. In issue 201 of December 1978 he confessed he had forgotten to mark the 200th consecutive monthly issue. He then published this article looking back on those 200 issues, including a look back to issue no 1. 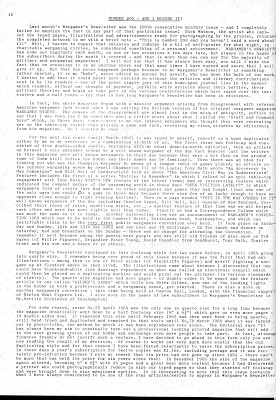 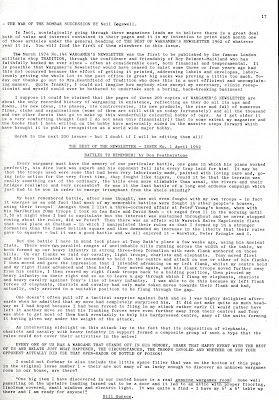 We also should not (and will not) forget his many books, which introduced many people to the hobby. 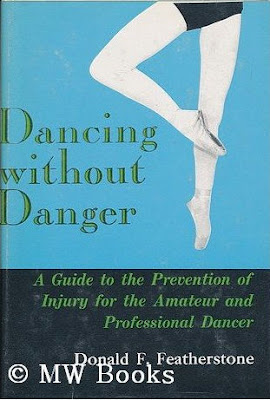 But a serious point - outside of the hobby Don Featherstone had many achievements and a whole other set of published work in his professional life as a physiotherapist, with Southampton FC and elsewhere.
Posted by Vintage Wargaming at 09:55 10 comments: