The Lamming Seven Years War range has almost a mystical standing. Released for only a short period in the 1970s, no-one seemed to have any figures, pictures, or lists for the range.

Recently two things have happened - first, this turned up in a mixed bag of figures: 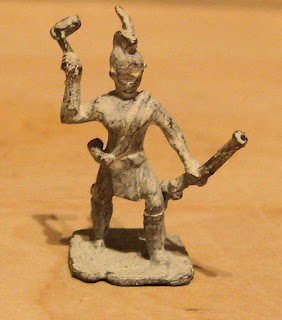 a previously unseen Native American figure with a characteristic Lamming Easter Island face; although obviously a copy rather than an original figure, this has the look of a Lamming figure, so I wonder if it might be a Lamming SYW - no other obvious candidate for which range it might be from (though as mentioned above in the absence of a list for the range there is no evidence it was included).

I am by no means 100% sure this is a Lamming figure but currently that seems the most likely option. Maybe someone out there might recognise this figure.

Then a few weeks later some figures appeared on ebay billed as Lamming SYW. I was pleased to win them but a little disappointed when they arrived that they are clearly not original figures - the shiny metal mix is wrong and bubbles on the underside of the bases show they are recasts. 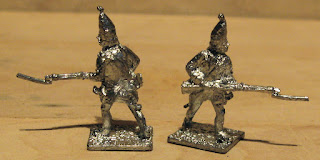 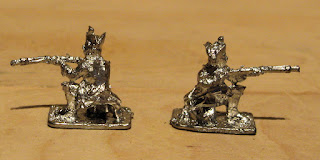 However, I have never seen them before. They clearly are Lamming - a give away is the dimpled grass effect on the top side of the bases, and the Jagers are very reminiscent of the rather lovely Lamming Napoleonic dismounted hussar. Also, the code on the underside of the Prussian Grenadiers have survived the recasting progress, so we can at least make a start on a Lamming SYW range list - P1 Prussian Grenadier. 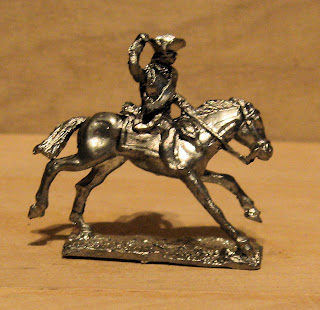 Finally, the loveliest figure is this Cuirassier. It came as a surprise that this is a one piece figure. It came with a standard made from brass sheet. It looks like this might be a conversion of an officer or trooper figure with drawn sword.

If anyone has any information on the Lamming SYW range, any figures from it or photos of figures from it, or a listing of the figures in the range, I would be very glad to hear from you.
Posted by Vintage Wargaming at 17:34 No comments:

I've had a request from Patrick who is trying to make contact with Neil Cogswell (of War of Bombar Succession fame)regarding Horace St Paul, an Englishman who served in the Seven Years War. Patrick believes Mr Cogswell has studied Horace St Paul in some depth and would like to ask for some help regarding a volume of St Paul's correspondence published in 1904.

If anyone is in contact with Mr Cogswell and could help put Patrick in touch with him,
please could you respond using the link in "Contacting Vintage Wargaming" at the top of this page.

Posted by Vintage Wargaming at 23:29 3 comments: