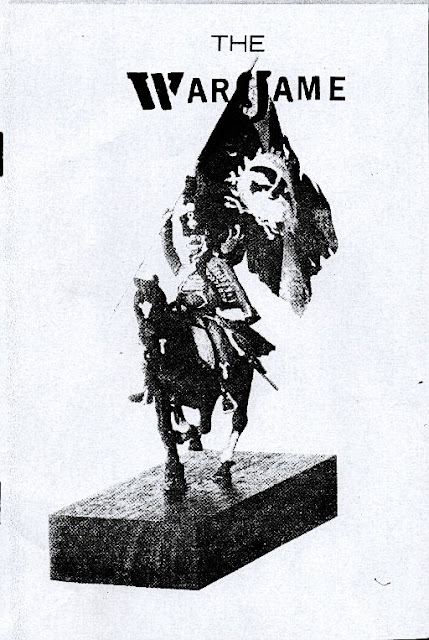 I have a photocopy of Pat Condray's 1969 translation of these rules, published by the Armchair General. It comprises a series of games (Napoleonic; then 1680 and American Civil War variants) which were originally devised by the Societe de Collectionneurs de Figurines Historiques. They were edited by Pierre Foure and first translated into English by Pat Condray in 1964. The 1969 version contained a revised translation.

They are noteworthy for a number of reasons:

a) they are not well known
b) they are unusual because of their French origins
c) they are designed for use on a hexagon based board
d) they could be used with figures or with bases (playing pieces)
e) they contain short adapted versions for two further periods.

Given the current interest in playing Command and Colours Napoleonic with figures, perhaps they deserve to be better known.

I would be interested to know if anyone out there is familiar with these rules or has indeed played them.

They also contain some interesting line drawings in the section on the 1680 variant of a line of 20mm figures. Again, I would be interested to know if anyone can identify this range.

Apologies for the quality of the attached pictures - they are scans from a not very good photocopy.

Posted by Vintage Wargaming at 19:49

I have not seen nor heard of these rules but would be really interested in having a copy to try out on my Hexon terrain. Do you plan to upload them on the blog at all?

David, I have contacted Pat Condray to ask if he would give me permission to do this

After these rules wer published, there was a pretty active gaming group that adopted these rules wholeheartedly, in Alexandria, Va., just across the river from Washington, DC.
The rules were really quite nicely balanced. None of the arms was overwhelming, so using the strengths of each became necessary.
There are some odd quirks. All units have the same strength (infantry are four bases of five figures, cavalry are two bases.) Units automatically break at half strength. Casualties occur slowly, but build up in proximity to the enemy. Keeping reserves was almost always necessary.
Broken units automatically rally unless fired upon, or adjacent to enemy units.
A favored tactic was to break skirmish capable battalions, down to one base, and then pursue routed units as long as possible to keep them from rallying.
If one wants a nice, simple set of combat rules, then these are definitely worth trying.
If one wants a set of rules that showcase the nationality differences between the different armies of the wars, then these rules will not be satisfying.
(The one thing I can offer, is they are so straightforward, that modifying them is not so hard.)

Chasseur, when we first started trying the rules, I think we all tried them solitaire. That's where the ease of play was so appealing.
Rules of that time, at least the ones I found people playing locally, seemed to mostly be variants on Fred Vietmeyer's Column, Line, and Square rules.
These aren't bad, but felt artificial with tons of die rolling to resolve melees, one to one.
Also, for some reason, people set up games with each player only controlling a few battalions.
With Le Kriegspiel, we started with six maneuver units per player, maybe more. In no time, folks were running "divisions" with eight battalions of infantry, four of cavalry, and four batteries of artillery.
We really enjoyed acting much like historical division commanders such as Friant, Picton, or Saint Hilaire.
One CLS gamer was confounded by the ease of play, and sniffed that it was written for babies.
To each his own.

This older post just popped up for me in a "kriegspiel" search. If anyone still cares about the identity of the 20mm figures in the line drawings, they are flats from Christian Terana of Paris.

Some painted examples on my blog.