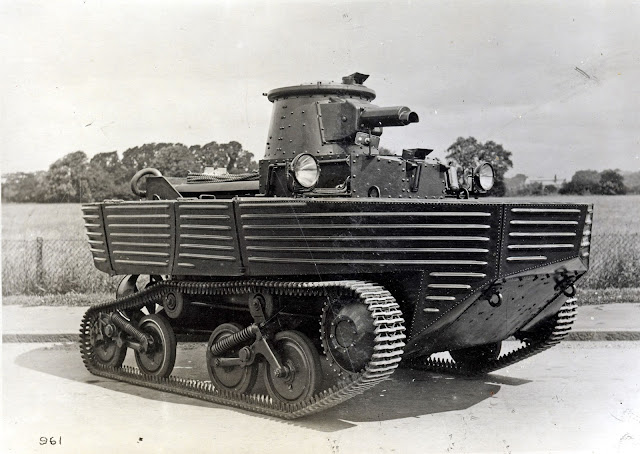 I have been back to Beamish today to go through the second album and list all the captions. I have now added these captions and all the interwar photos to the new blog. I have also put a labels gadget early on the page as this is the main means of searching, rather than browsing, the blog.

The new photographs include Carden Loyd Mk VIs of various types, the double half track, an extensive collection of trailers, the Tractor Truck and its variants, Dragons and Light Dragons, bridging, and tilting trials for the Vickers Medium.

Hopefully plenty more of interest. This is all the interwar photos, except some which have not been digitised as yet, possibly because they were too big for the scanner.

There are also around 20 photographs of WWII or just post war subjects - 13 of variants of the Valentine, the Tetrarch, Harry Hopkins and several variants of the Alecto. I won't put these on the new blog as they are not interwar but I will look for some other way of making them available.

Next job is to start adding text to posts and methodically looking at the labelling.

There have been more than 6,000 page views on the blog in its first seven days so it looks as if it is proving useful.

Posted by Vintage Wargaming at 22:19

Wow - that is a cool tank! Would love to have one for the weekends!

That really is a very cool little tankette. Almost has that home made back yard look to it.