I think the content of this post qualifies as Vintage Wargaming, as it uses some very old rules - Lionel Tarr's "Modern Warfare" set - and also some old Triang rubber buildings.

So I wanted to try a few things out:

firstly, could I temporarily set up a wargames table in my front room
secondly, my recently added to collection of old TSS hex tiles as terrain
thirdly, some of my interwar stuff
fourthly, some possible war for interwar action with a reasonable amount of armour involved

I couldn't get decent light for photos in November; I need to replace the LED lights with brighter ones if I want to be able to take decent pics
Size of table - I have two folding tables, each 4 foot by 2.5 foot, but each with two additional 2 x 2.5 foot leaves which fit in an expanding metal frame. I can fit an 8 x 5 table but not with a lot of room to manoeuvre round so will try 6 x 5 next

I tried a cut down version of the old Lionel Tarr "Modern Warfare" (i.e. WW2 rules). This took out the 88s and heavy tanks etc. They worked surprisingly well for what I wanted (very bloody for the infantry and especially cavalry). I will try Rompan el Fuego next.

I wouldn't have called this VBCW, it was interwar and trying to represent an Army Exercise from around 1935/6. I used a little historical licence so I could include Morris Martel tankettes and Burford Kegresse half track MG Carriers. The basic idea was the King's aircraft (DH Rapide of the Royal Flight) had made a landing forced by mechanical failure at a civilian aerodrome.

His side (Westland) had rushed heavy AA cover and the latest sound detection to the aerodrome and surrounding area to protect against air attack. 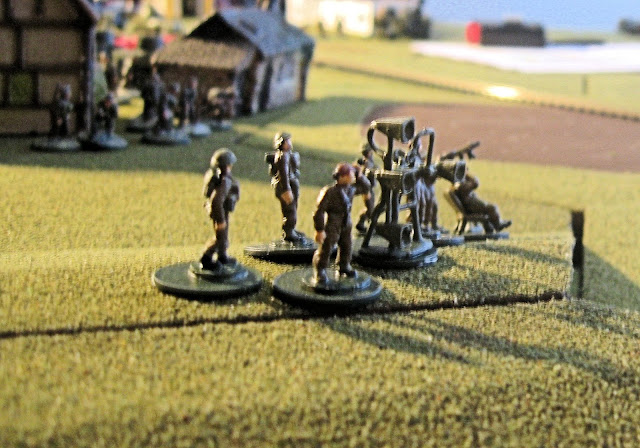 There was a small LDV garrisons at a nearby village 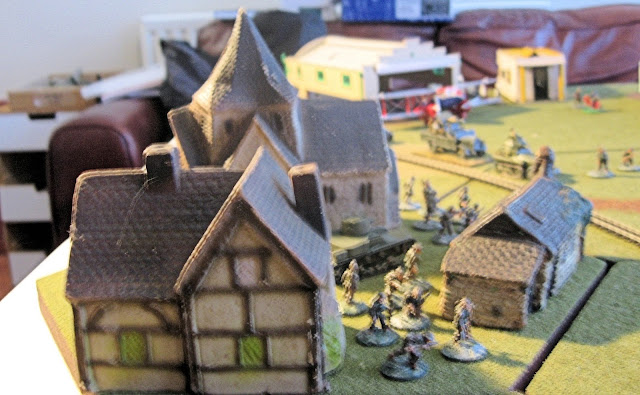 which sent three companies to defend the airfield, along with a Schneider half track armored car and an 18 pdr truck mounted gun. 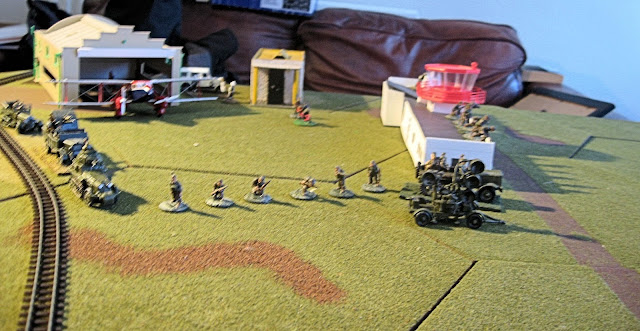 Two coys LDV remained in the village with two gun armed  Vickers 6 tonners, which would need activation to move. 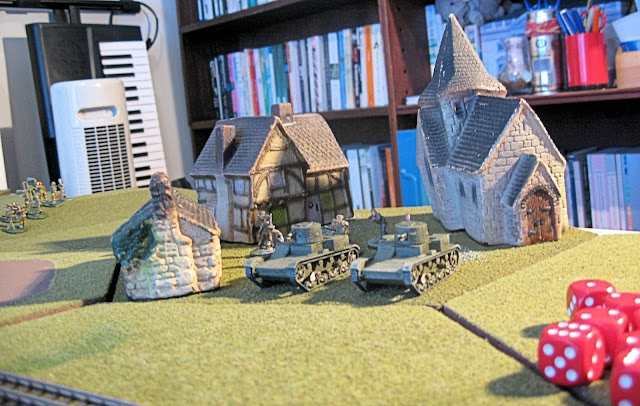 At the far end of the table a police barracks contained a battalion strength unit of armed police, with armoured transport and cars, and 4 Mk VI light tanks. All these units would need activation. 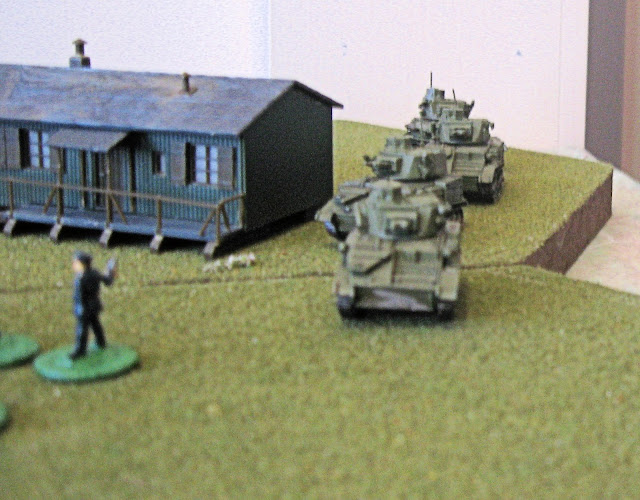 A small road ran the length of the table, half way across. At the far end from the aerodrome a company of regular infantry, a cavalry regiment, and a twin MG armed 6 tonner assembled to advance on this line to the aerodrome.

A railway station (Nissen Hut) lay on the far edge of the table, diagonally opposite the aerodrome, with a narrow gauge railway line running to the aerodrome. A regular infantry battalion was at the station awaiting transport.

When successfully activated this would be provided by an armoured train, armed with anti tank rifles and Lewis guns.

Originally my intention was to have the Eastland force traversing the length of the table to reach the aerodrome where two gliders would land a small force with the intention of seizing and holding until relieved (a la Market Garden). However, in the end the table was not long enough so instead I went for a large opportunistic armoured raid all along the long edge of the table.

Bearing in mind this was a test to see how the Lionel Tarr rules would cope with a lot of infantry and a fair number of armoured vehicles rather than any attempt at a balanced action, Eastland had a medium tank battalion (3 coys each of 3 Vickers medium tanks, all MK II except for one MK III in command), a light tank battalion (3 coys 3 light tanks, 6 MK II and 3 Vickers Command tanks), and a battery of 2 SP Birch guns. There was an armoured car section with 1920 pattern Rolls Royces and a recce section with 4 Morris Martel tankettes -- 2 1-man and 2 2-man. 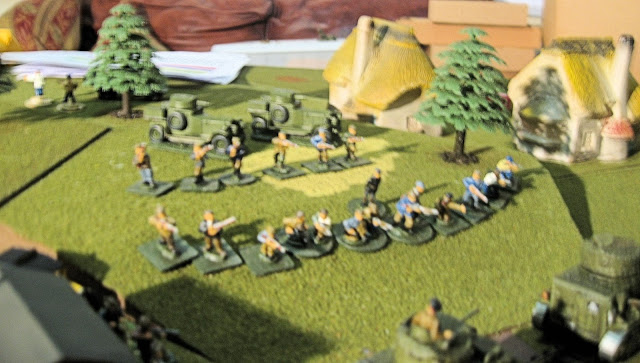 The militia occupied a large hill to the left of the railway line, along with an artillery OP. Other infantry included 2 or 3 companies each of regulars, and an auxiliary police unit. There were two companies of the 1st DLI in their role as an experimental MG battalion.One company had Vickers Utility tractors as MG Carriers and  the game's only anti tank gun (towed tracked 20mm Oerlikon). 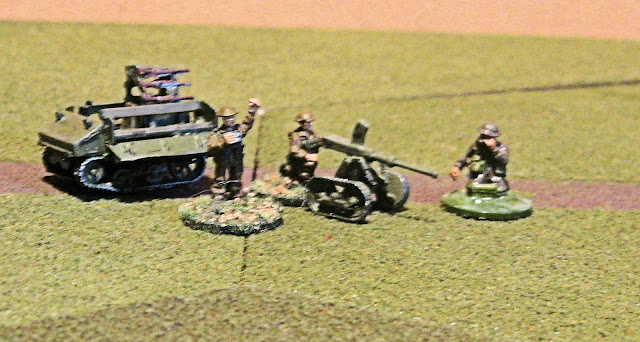 The glider landing was activated in move one. Two gliders hit the landing zone exactly, blocking the runway for any possible escape by aircraft, and landing a battalion of LDV troops behind the terminal defenders. 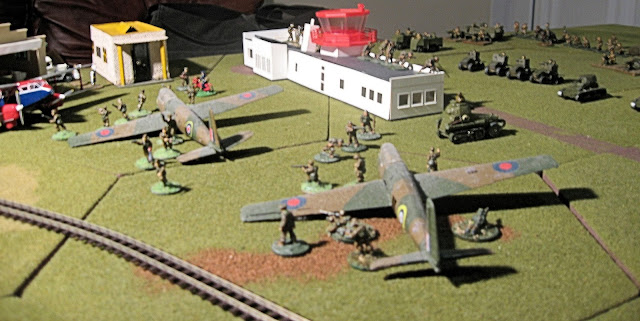 Eastland made a general advance along the long side of the table and advanced to the railway line.

In two moves they reduced the defenders of the terminal and took control of the airfield. While Westland had more modern armour there was less of it and they struggled to activate it.

The Birch guns were spectacularly successful, taking out the dangerous truck gun with ranged fire and the armoured train, when it appeared, along with the battalion it had entrained, over open sights. Cavalry regiment v MG armed light tanks ended badly for the cavalry. The only a/t gun, the DLIs 20mm, only had one shot and caused no damage. (Doctrine at the time was the best anti tank gun was another tank so this was quite historical). The armoured train's Boys ATR took out one Vickers medium and one of the gun armed 6 tonners another, but that was the total extent of Eastland's armoured losses.

The Birch Guns were queen of the battlefield but did not use their mobility at all, so towed artillery could have been just as effective. Hopefully next time they will be able to take a fuller part. Given they can also be used in an anti aircraft role, you wonder what they or their successors could have achieved against the Blitzkrieg, or in the Early Desert.

With the aerodrome firmly in Eastland's hands, and strong armoured and infantry forces facing them everywhere, Eastland conducted a general withdrawal of their remaining police, LDV and Naval shore party survivors, with their two remaining Mk VI light tanks.

While very one sided this was a good run out for the general set up, the kit, the terrain and the rules 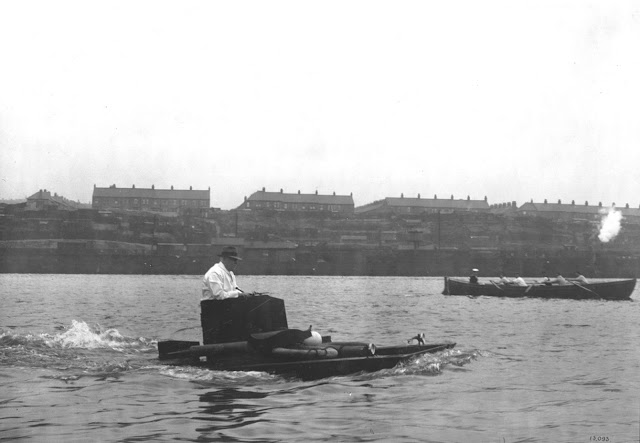 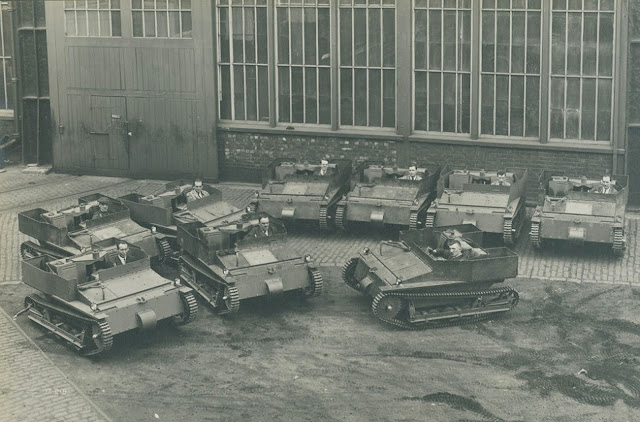 A while ago the Evening Chronicle published a gallery of photos from the Tyne & Wear Museum Service relating to Vickers Armstrong, ranging from around 1900 to 1948.

They can be found here and form an interesting addition to the pictures which now sit on the Interwar Tank Development Blog.

Among the interesting things:

#1 Shervick Tractors - manufactured from cut down British Shermans in 1948 for use in the Ground Nut Scheme;

#8 the rather bizarre man cages