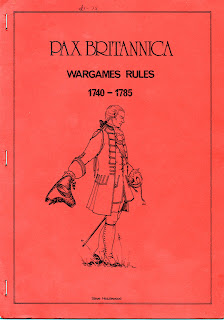 There is also a history of Pax Britannica on Vintage20Mil.
Posted by Vintage Wargaming at 08:17

We played these rules a lot in the 80s, with Spencer Smith plastic figures. Are the rules available on the Web anywhere?

I posted this five and a half years ago. The photo suggests I may have had a copy of these rules. I will look around and if I can find them I will let you know

drusty, I have found them. If you send me your email address in a comment (which I won't publish) I'll talk to you about them by email.

I have several original copies if you would like one? I'm also looking at digitising a set as a PDF if that's of more interest?

Hi, that is my original copy pictured and I have scanned it into pdf format already, but thanks