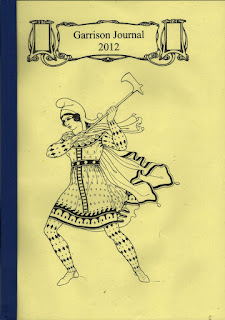 An interesting A4 envelope from Rob Young at Garrison popped through the letter box today. After 40 years' gap Rob has decided it is time for a second edition of the Garrison Journal. Officially the first one was the Greenwood & Ball Journal, edited by Charles Grant and published in the Summer of 1972. I did think I had previously posted about this original publication, but if so I haven't found it (so another post later...)

Rob's new effort contains some history of the ranges, old advertisements, and his battle report for Cunaxa 401BC. It looks like he intends this for limited circulation only - if he decides to make it more widely available I will add the details to this post.

Either way, it is very welcome. Up with this sort of thing! Careful now!

Posted by Vintage Wargaming at 11:42

More a case of indulging myself plus I felt that I should produce something to mark the 40th Anniversary of the last one. The original 1972 Journal is on the Garrison site:

I can't put this one on because I don't know how to add things to the Downloads section of the site plus it's a 60meg Publisher document anyway.

If any of you are mad enough to want to pay for a copy, happy to print off and send one at cost - works out at about £2.50 including p&p in the UK.